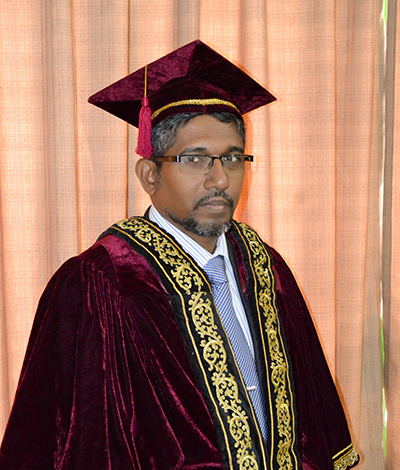 Professor Najim has extensively engaged in curriculum development and revision of four degree programmes namely B.Sc. in Natural Resources (Sabaragamuwa University of Sri Lanka), B.Sc. in Agricultural Technology and Management (University of Peradeniya), B.Sc. in Environmental Conservation and Management (University of Kelaniya) and B.Sc. in Biosystems Technology in Agricultural Technology (South Eastern University of Sri Lanka). In addition, he has served as a reviewer of curriculum of many Universities. Furthermore, Professor Najim has extended his immense service by contributing as a reviewer of Institutions and programmes of both national universities and non-state sector higher educational institutions.

Professor Najim has won many prestigious awards out of which Kamban Award in 2017, Presidential Award for Research in 2013, 2005 and 2004, NRC Merit Award for Scientific Publication in 2011, Award for the popularization of Science in 2008, Merit certificate for popularization of Science in 2007 and Hisamatzu Prize in 2000 are significant. He has published 51 full research papers out of which 21 are in peer reviewed Indexed Journals. In addition, he has published 71 short scientific communications, 3 book chapters and has translated several books. He has also contributed in curriculum formulation and revision, training of teachers, authoring of teacher and practical guides, editing of text books for the G.C.E. (A/L) subjects Agriculture and Biosystems Technology under the Ministry of Education.

Professor Najim has been ranked as one of the most outstanding Sri Lankan Scientists. He has produced three Ph.D. holders, 1 M.Phil. holder and 3 Masters degree holders. At present he is supervising three Ph.D. students.


He is proficient in all three languages: Sinhala, Tamil and English.


Professor Najim is married and a father of three kids, two daughters and a son.

Office of the Vice Chancellor